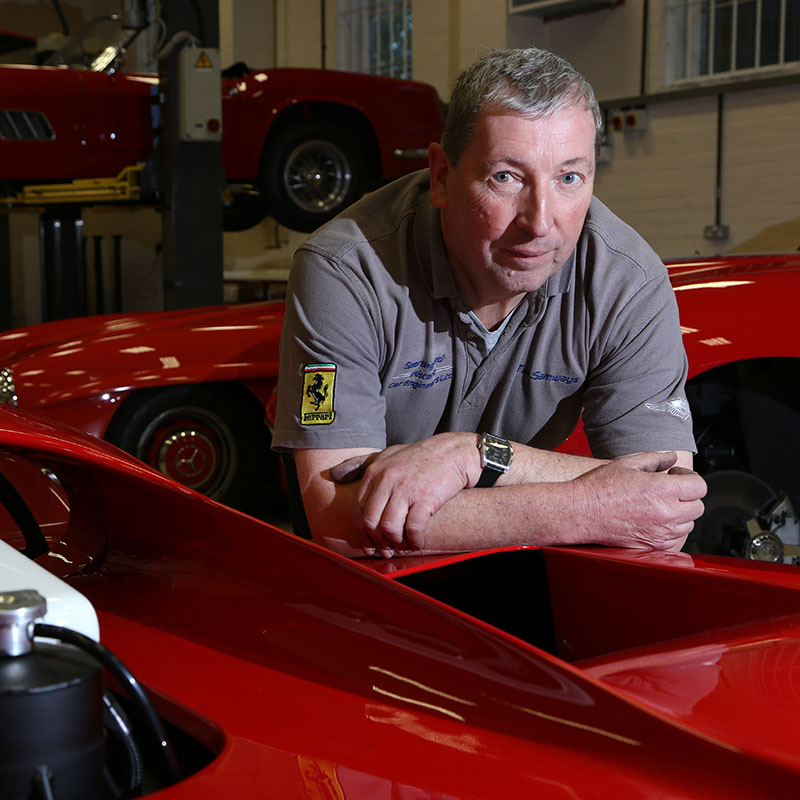 Sporting & Historic Car Engineers was established in 1989 and for 30 years has been providing specialist automotive engineering services for customers in the international historic motorsport arena.

Our highly experienced engineering team come from a diverse background of professional motorsport disciplines including F1, WRC, endurance GT and we have worked hard to forge a reputation for highly effective development of some of the most successful racing cars competing in the world of historic racing.

Our infrastructure, whilst predominantly engineering led, is underpinned by a diligent and efficient administration team, ensuring we meet or often exceed levels of customer service expectations. 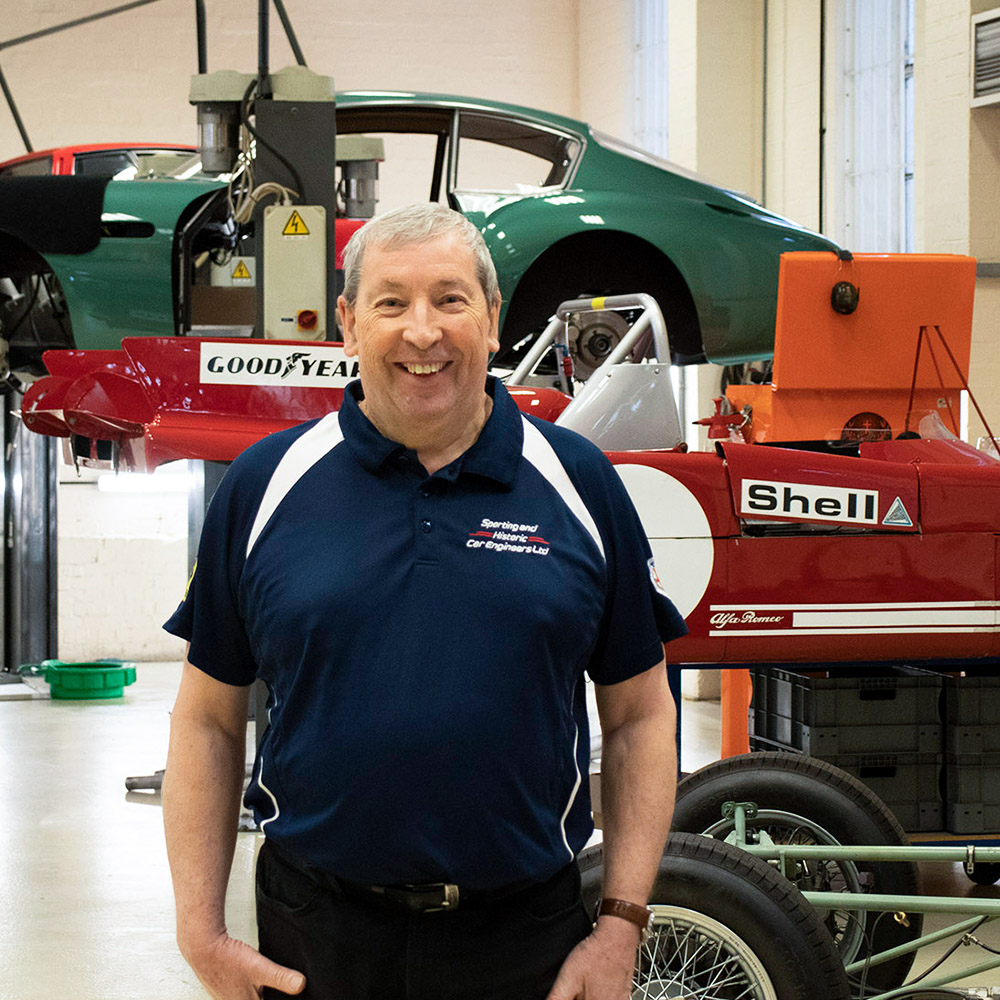 Tim spent his childhood on a farm, saving his pocket money and buying his first motorbike – a BSA Bantam - when he was 10 years old. After leaving school he took an apprenticeship engineering course at Banbury College.

His first job was working for his local motorcycle dealer and when they took on a Yamaha agency he looked after that side of the business. Meanwhile he started preparing and racing motorcycles in the British Championship and home international with a lot of success.

In his spare time he helped a local enthusiast who owned some classic cars including a Ferrari 275 GTB where he got the bug for this type of work.

He worked for a while at Hesketh on the prototype motorcycle until the launch and then went to look for a change in career.

While working at a Ford dealership for a while he realised that part of the industry didn’t really have what he was looking for so in November 1989 he found premises and set up on his own. He started out by looking for historic cars to prepare and restore and soon started working on Aston Martin, Porsche and Ferrari.

His first break came in 1991 when he was given the 1959 Le Mans winning Aston Martin DBR1. This required a total rebuild and, because it still had the original engine, it was decided to build a completely new motor. Tim sought out foundries and machine shops and oversaw the manufacture of his first engine. Its first outing was the 1993 Ecosse Tour where the proud owner enjoyed the car to its full extent. It was then decided that the car should be raced and, with Peter Hardman driving, the rest became history with numerous wins in all the major races.

Tim went on to run cars in the fledgling Ferrari Historic Challenge in Europe winning the championship in 1995 and being awarded Preparer of the Year by Ferrari.

The highlight of 2008 was winning Goodwood Revival TT taming the Ferrari 330 LMB and turning it into a race winning car.

Having outgrown and moved premises twice a final move was made to Greatworth Park in 2008 where he has grown and developed the business into its current position; frequently working with prototype cars and enjoying that challenge, again making engines - this time for the Alfa Romeo T33 prototypes.

More recently he has also taken in 2000 and 2003 Mercedes DTM cars and in the last two seasons running Aston Martin DBR9 GT1 cars in the new series. This is a natural progression for the business as it fits well with the prototype work and there is a lot of interest in these newer cars. 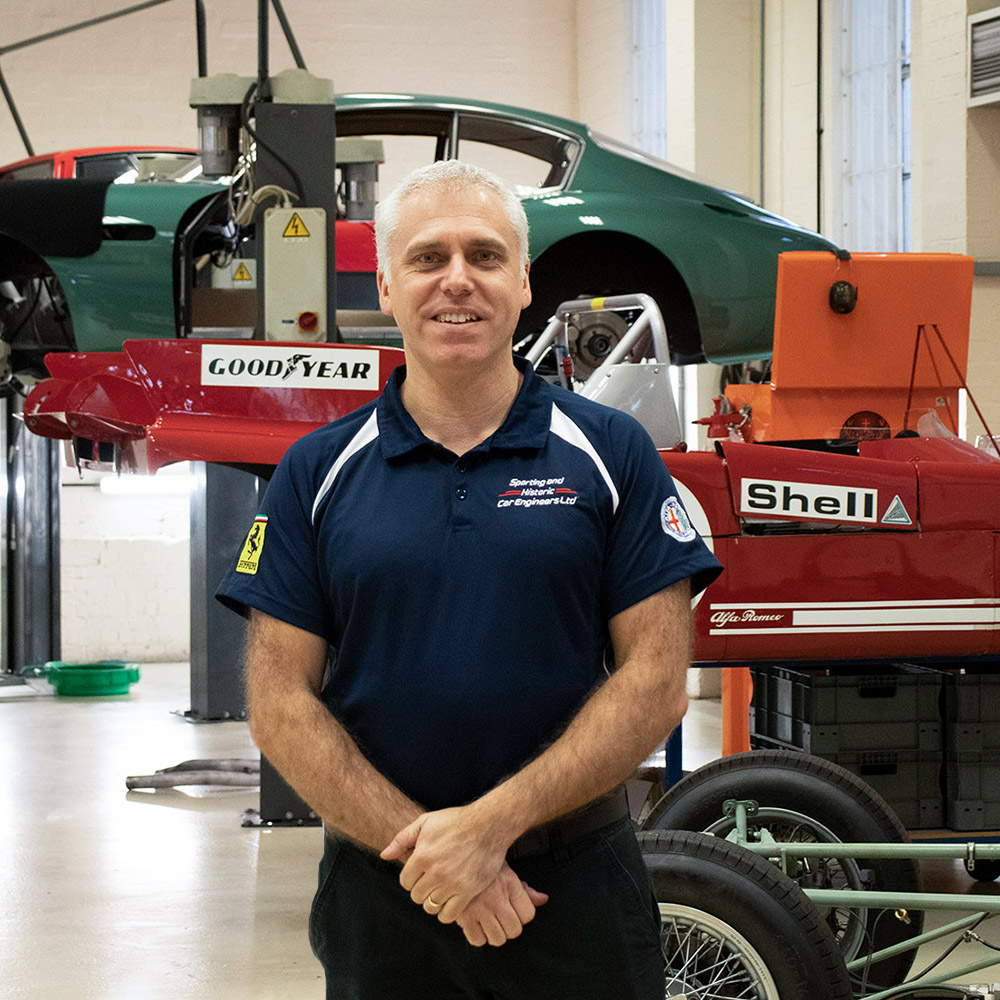 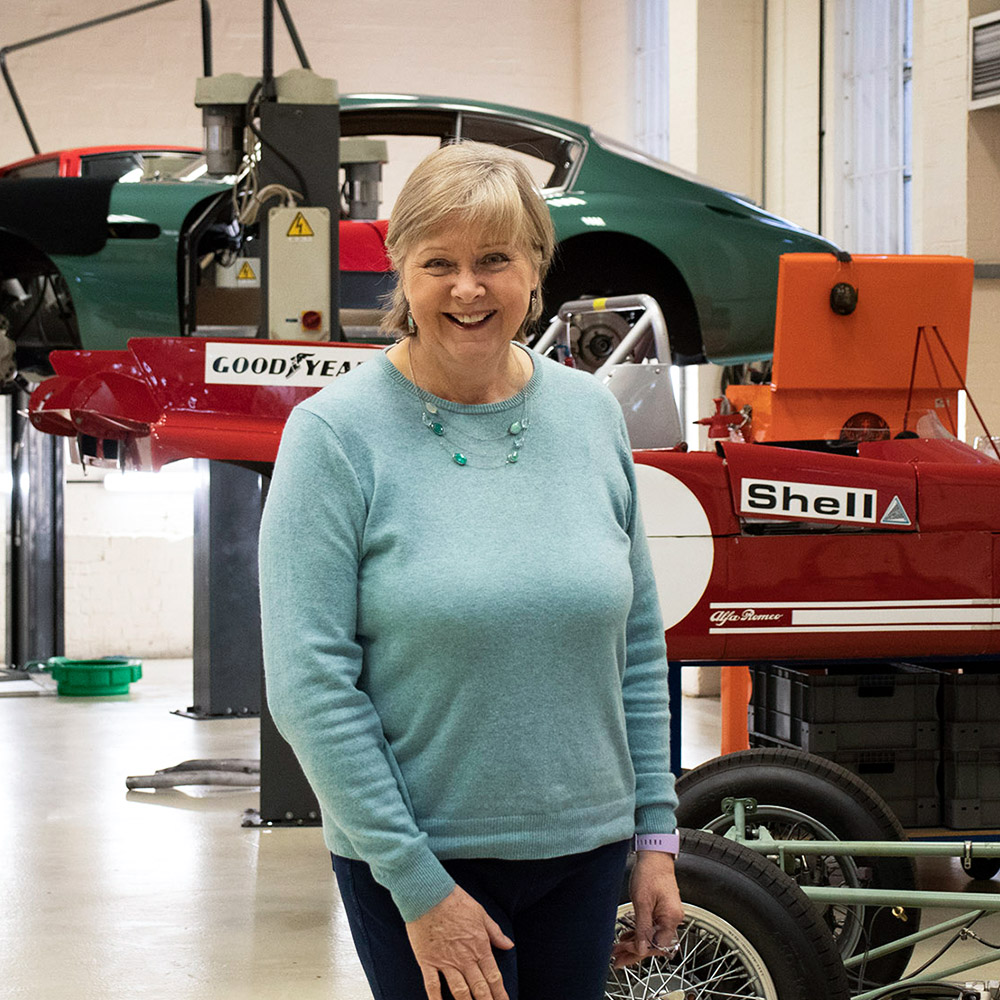 "My first job was with the Civil Service and after seven years I took a break to have my three children. I then worked for various companies bookkeeping and doing administration and secretarial work. In my spare time I have enjoyed sewing, singing (barbershop), amateur dramatics (panto), puppeteering and now looking after the grandchildren (phew)! My father had been in the motor trade and nurtured in me a love of cars so when I was asked to work exclusively for Tim it was just right for me. That was in 1991. I started doing Tim’s books and gradually took on more secretarial work, running the office and eventually becoming Company Secretary. After nearly thirty years of working together we have seen the business grow into the successful company it is today." 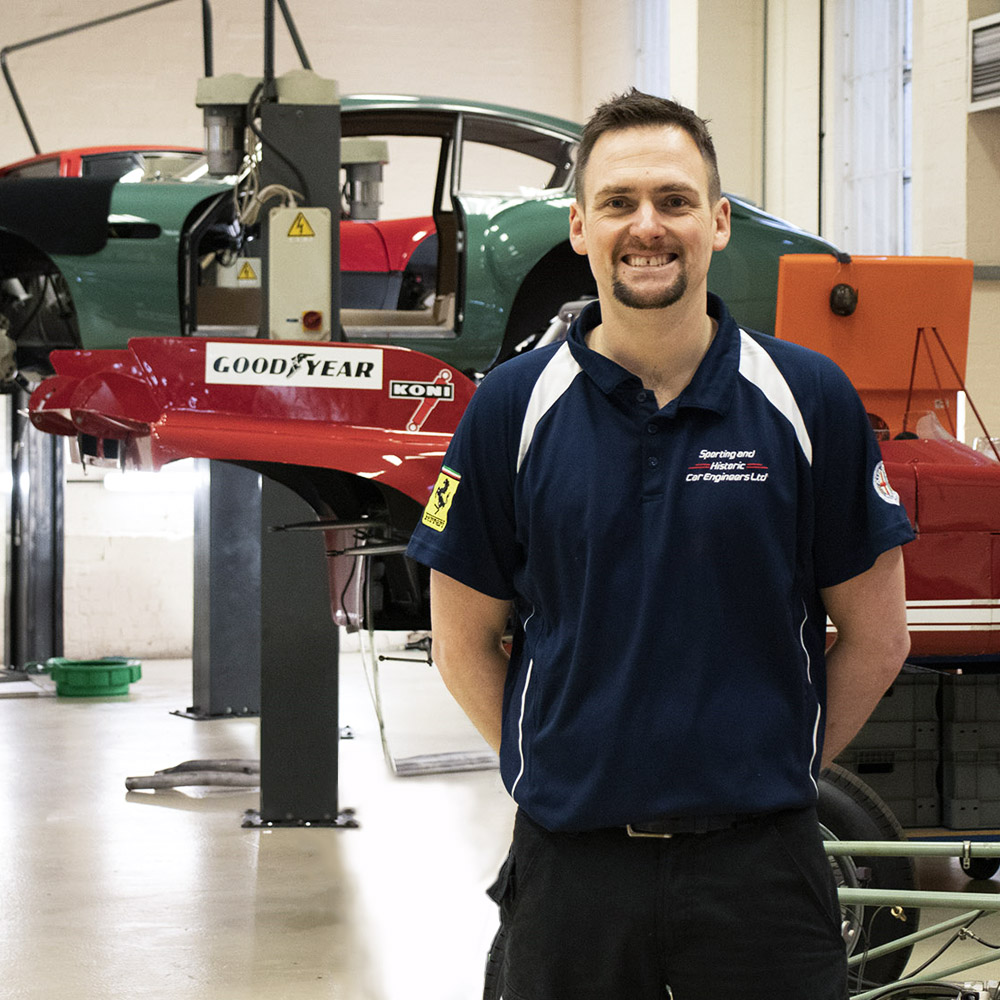 Ben has gained a wealth of experience in several different championships over his 20 year Motorsport career. He started with junior single seaters from Formula Ford, BMW, Formula 3, and then moved onto A1GP, Formula 1, British Touring cars, Speedcar, Prototypes, GT’s and Formula E. There’s not much he hasn’t had his hands on over the years. Ben finds nothing more rewarding than building and preparing a beautiful car and is passionate in ensuring all work done at S&H cars is done to the highest standard and as efficiently as possible. 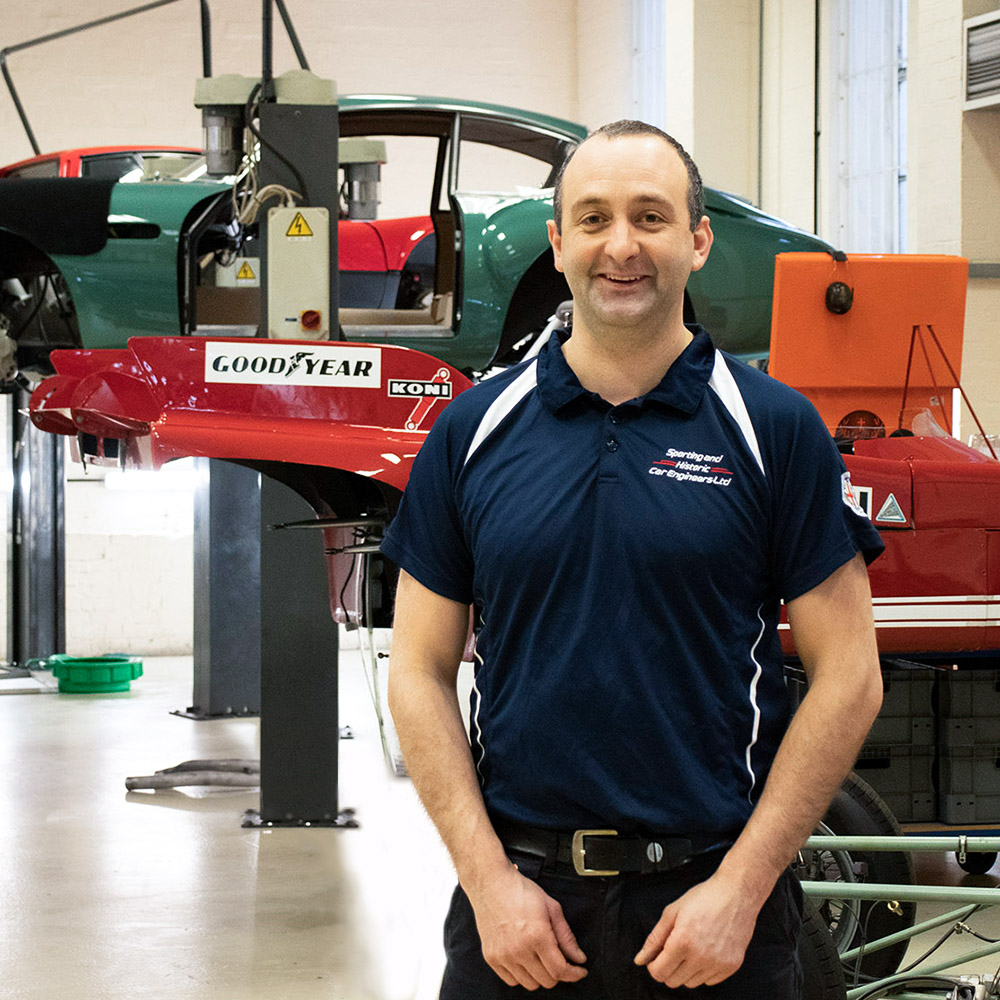 Ben Bradley has had a passion for cars and engineering from an early age and over the past 20 years has established a career which has given him the opportunity to work on some of the most famous race and road cars in history, such as Porsche 993 GT2 & 962, Ferrari 250 SWB & 1957 Testarossa, Aston Martin Vantage GT3 & GT4 to name but a few! Having worked his magic at a respected Porsche race team, Ferrari dealership and Prodrive, Ben has always appreciated the old and the new when it comes to cars and finds working in this industry both exciting and rewarding. One of the highlights of his career has been to rebuild, prepare and support the 1959 Le Mans winning Aston Martin DBR1/2.